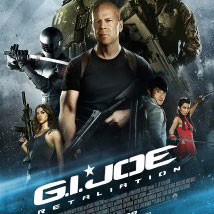 If you’re a big G.I. Joe fan and you know all the characters and their relationships to each other then you might like this movie. But I’m not a G.I. Joe fan and I don’t know anything about the universe so a large portion of the movie was confusing to me. It was easy enough to figure out who the really good guys are – the Joes. And it was easy to figure out who the bad guys were. But then there’s the bad guys who aren’t really bad and want revenge against the really bad guys so they fight with the good guys. Well, I think that’s what was going on because I don’t have a clue who these people are and the movie gave very little background.

I knew what the plot was just from the trailers so no surprise there. That much was easy to follow. But there was so much that was contrived beyond belief. I rolled my eyes more than once and I’m a pretty forgiving fellow when it comes to moving the plot forward.


At least there is a lot of action. But I didn’t see anything that was really impressive.

If you’re only going to see it because of Bruce Willis or Channing Tatum then don’t bother. They don’t have more than 10 minutes of screen time combined.

One more thing; I know this is nitpicking but it bothered me that Lady Jaye wore mascara in the battle scenes. Seriously, would a female soldier ever think, I have my gun, my ammo, my grenades…what I’m I forgetting? Oh yes, I forgot to put on mascara. There were lots of other things I could nitpick on but that one just stood out.

The only good thing I can say about the movie is that there are a handful of times that the audience chuckled. Other than that I found nothing redeeming about this movie.