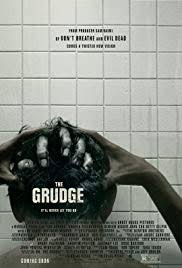 The Grudge hits theaters January 3.  It’s been fourteen years since the 2004 American remake, also titled The Grudge, starring Sarah Michelle Gellar.  This horror franchise has had a long history in Japan and America.  So here’s a deep dive into the story of The Grudge.

Origin of the Series

Director Takashi Shimizu said the inspiration for the film Ju-On came from Childhood Fears, a dance troupe that would paint their nude bodies white and perform, and an increase of domestic violence cases during production of his previous films.  The title roughly translates to “Curse Grudge.”


The movies in the series generally revolve around a curse created by a murder.  In the world of the films, when a person dies with a powerful rage, a curse is born.  The curse gathers where the person died or at the place they frequented, and it repeats itself there.  The dead haunt the location and may kill anyone who encounters the curse (say, by entering a cursed house or being in contact with someone who was already cursed).  The curse’s main manifestation is death.  The deaths may create more curses and spread them to other locations.

The first two films in the series (Ju-on: The Curse and Ju_On: The Curse 2) were direct-to-video releases that became surprise hits.  Both films were shot in just nine days.

The first movie is a non-linear episodic film divided into six parts, which follows the tenants of a cursed house where a man murdered his wife and  child in a jealous rage.  Most of the films in the series follow this non-linear format of storytelling.

Half of this film is a retelling of the first movie.  But it introduces some new information on the events of that film and a few new characters.  It also sets up some plot points that play into the later theatrical timeline. 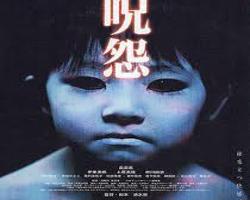 Ju-On: The Grudge is probably the most famous of the original Japanese Ju-On horror films, because it’s the movie that the 2004 American remake The Grudge is based on.  (Even though it’s actually the third movie in the series.)  Ring screenwriter Hiroshi Takahashi helped Shimizu develop this sequel for theatrical release.  Whoever enters the murder house is consumed by the curse, which spreads to the place they die in, and in turn consumes anyone who comes in.  A social worker is sent to care for an ill old lady living in the house and faints at what she finds.  The police are called and soon they start investigating the history of the house, and consult a retired detective who is wary of revisiting the case.

The director of a popular TV horror show casts a scream queen as a special guest star in an episode set in the murder house.  The curse begins to affect everyone involved with filming, including the actress herself. 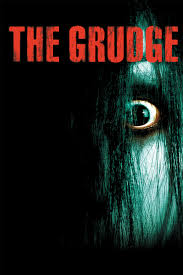 Shimizu got to remake Ju-On: The Grudge with an English-speaking cast.   It was a box office success.

In this version, Sarah Michelle Gellar (star of Buffy, The Vampire Slayer) plays a second care worker sent to the murder house when the old lady’s first care worker disappears.  She is then terrorized by the curse.

Shimizu returned to direct the American sequel.  Instead of a remake, this time the movie used a new storyline continuing from the last film.  The three subplots include: Gellar’s younger sister coming to Japan after finding out about her boyfriend’s death, a schoolgirl being hunted by the ghosts after entering the house, and a boy whose apartment building is haunted by the ghosts.

This was a DVD release, with Toby Wilkins directing and Shimizu executive producing.  The living sister of one of the ghosts tries to break the curse by holding an exorcism.

This 2009 movie is one of two films produced in honor of the tenth anniversary of the Ju-On series.  It was written and directed by Ryuta Miyake.  A boy is possessed by a spirit from a mirror and murders his family, and then himself, creating a new curse.

This is the second film produced to honor Ju-On‘s tenth anniversary.  It was written and directed by Mari Asato.  A cyst found in a young girl’s body turns out to be the remnant of her unborn twin (who then tries to posses her).

Ju-on: The Beginning of the End

This is a reboot of the series that returns to the original family/murder house.    It was directed and co-written by Masayuki Ochiai.  Subplots include a group of high school students who visit the house for kicks, and a school teacher who comes to the house out of  concern when one of her students is absent for a week.

This movie follows the continuity of the last film and was directed and co-written by Masayuki Ochiai.  A young boy who lost his parents moves in with his aunt and cousin where hauntings begin.  A woman named Mai, who sees visions of her dead sister, tries to end the curse once and for all.

This movie is a crossover of the Ring and Ju-On series.  It was originally teased as an April Fools joke.

When two college girls watch the cursed video tape (from the Ring) and only have two days to live, they pit evil spirit Sadako against the ghost Kayako (from the murder house) in a bid to save themselves.  If the two vengeful spirits destroy each other, the girls will be free.

The latest American entry in the series takes place at the same time as the 2004 version.  Fans familiar with the series will catch references to other films, but new viewers will be able to enjoy the movie without getting lost.  Director Nicolas Pesce said the movie is closer to the original Japanese films.  He made an effort to shoot it in a claustrophobic style.

chevron_left Is there anything extra during the end credits of Spies in Disguise?
Star Wars Analysis – What does balance in the Force mean? chevron_right