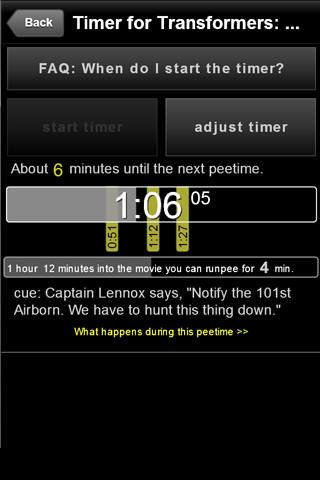 The new RunPee app has been approved by Apple and is available for download on iTunes – 4Free! Also available on Android and Windows7 Mobile.

Note: this is not an update to the existing RunPee iPhone app. This is a totally new app built by me,  not RockSoftware – now named RockLive. The agreement between myself/RunPee.com and RockLive has ended and now I’m able to create my own apps. Unfortunately due to a technical snafu by Apple the old app can’t be updated. But don’t worry, this app is free.

However, the most important thing – the peetimes – were always done by me and my family so that much remains the same. For the time being you can use either app you want. But later this year the old RunPee app will be discontinued and the peetimes will no longer be available through that app.


What’s new with the RunPee app?

There are a few features that I’ve added. First off we now write a synopsis of the first 5 minutes of the movie for those who are running late. So if you’re late to the theater or caught in the concessions line you’ll know what you missed. We also have a short message from the person who harvested the peetimes letting you know which one we would recommend using and how difficult it was to get peetimes for that movie.

Also, you can see from the image – upper-right – that movies are divided out by month, or first letter, so that it should be much easier to find the movie you’re looking for. In the next update – by the end of July – I’ll add the ability to do a text search for any movie in the database.

The biggest change comes in the Timer. Instead of just showing you how long the timer has been running you can now see a progress bar with the peetimes marked off. I also show you how many minutes you need to wait until the next peetime so that you can see at a glance how long you need to wait. In addition the cue for the upcoming peetime is displayed so that you never have to leave the timer.

Unfortunately at this time there is no vibration alert built into the timer. But that will be coming in an update probably in September/October. ( This app is built using Adobe AIR which currently does not have the ability to vibrate the phone. However AIR 3.0 due in a few months will have that ability and I’ll update the app pronto when it does. )

related: Why use Adobe AIR?

I have also added an “About Page” so that if you care you can read a little bit about the people who go and get the peetimes for the app.

If you would like to be on the beta-testing team send me an email – to [email protected] – with the UDID number of your iPhone/iPad.

As always don’t hesitate to suggest improvements or new features. Many of the new additions to the app came from users like yourself.

Thank you for your time and support of RunPee.com. Please remember to tell your friends and family about the app because as we all know, “A bladder is a terrible thing to hold.”

chevron_left Why use Adobe AIR?
Beta version of RunPee 1.1.0 chevron_right