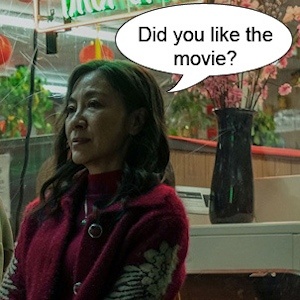 TL;DR
Everything Everywhere All at Once is an excellent date-night movie choice for couples under 50. Check out the charts below to see why.


Everything Everywhere All at Once has received rave reviews from both critics and the general audience. But, it isn’t a hit with all genders and age groups. Here’s the breakdown of the data in the RunPee app Peeple’s Poll.

In the RunPee app, users are asked to submit their Expectation for a movie before they see it and then when the movie is over they can submit their Final Rating. This allows us to say not only how good, or bad, a movie is, but also how well it performed against expectations. We also ask for the user’s age and gender so we can display results specific to their demographic. For instance, if you’re a 35-year-old woman you are probably more interested in what other women about your age think about a movie versus what an 18-year-old boy thinks.

Peeple’s Poll rating according to women

There is a clear trend that the younger a woman is the higher their Final Rating for the movie was. The 30-39 age group gave the movie the highest rating and had the largest jump from Expectation vote (+10.3). That’s a huge margin. (I’m not counting the 10-19 age group because there were only 3 votes submitted.) You can see that the Expectation didn’t vary all that much from one group to another.

Peeple’s Poll rating according to men

The same general pattern for women holds for men. The younger the age group the higher the rating. However, men in the 60+ and 50-59 groups rated the movie higher than their female counterparts. Whereas, the younger age groups are pretty close to each other.

The only gender/age group where this movie didn’t meet Expectation is for women aged 60+.

I’m curious as to why this movie didn’t rate as well among older men and women. I’m in the 50-59 bracket and I think this movie is iconic. But I wonder if there’s something specific in the story that appeals to the younger audience. The most obvious conclusion is that the movie represents the struggle young people have with their parents, and more generally, with the Boomer generation.

While there are far too few votes cast by the 10-19 age range—only 9 votes total—the results are overwhelmingly positive. Assuming the trend holds I’d suggest that the marketing department needs to focus on that age group.

I’m looking forward to rewatching Everything Everywhere All at Once now that it’s streaming. I’ll definitely keep an eye out for the generational conflict to see if that might be an explanation for the disparity in the Peeple’s Poll results.